Five ways a PR can really annoy a journalist

This article was written for Response Source – a leading journalist enquiry service. You can read the full article here. 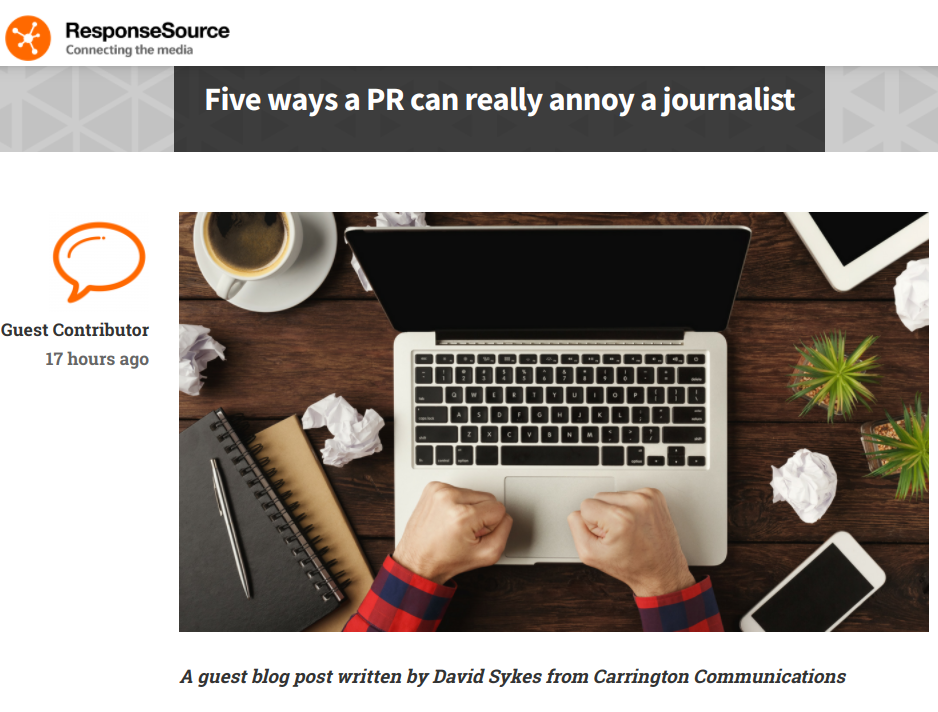 Before I made the move into PR, I was a BBC journalist for five years. I worked in newsrooms across the East Midlands as a reporter, newsreader and programme producer and now I’m working at a PR agency in Lincoln, Carrington Communications.

As a journalist, I worked closely with people who were doing exactly what I’m doing now, but my experiences weren’t always positive. Truth be told, like many journalists, I was often a little more rude with PRs than I’d like to admit and I became adept at batting off their advances as they offered me endlessly uninteresting stories.

Most journalists I know long for a world in which they can find the expert or business leader they’d like to speak to and persuade them to agree to an interview without having to run things past a press officer or PR exec first.

However, even the most stubborn journalist will concede that they do need us and it is possible to forge a great, productive relationship with some practices never getting annoying.

For instance, journalists are all too aware that they could be seconds away from losing a story they’re working on and a slow news day can be just around the corner. For this reason, they will always be happy to have their inboxes flooded with relevant press releases with ready-made stories that can be used at a moments notice.

But there are some common techniques PRs use that are so annoying they’re guaranteed to either prevent a story from running or they’ll leave a lasting mark on the relationship between the journalist and the agency or company responsible.

Here’s a few of the tactics I found most annoying while working as a journalist:

You might be the nicest, chattiest PR in the world but if you’re calling a newsroom with a story, it had better be amazing, breaking news that could lead the next bulletin. If it isn’t, you’re wasting the journalist’s time and they’ll be trying to put the phone down as soon as they can. The nicer you are, the more guilty they’ll feel about hanging up but it still won’t help. Email is almost always the best way to approach a journalist in the first instance.

2 – The invitation for coffee

A few times, I’ve been invited to meet a PR for coffee or a working lunch. From a PR’s perspective, this would be a great opportunity for them to pitch a load of stories they’re working on and to get a clearer idea from the journalist as to what they’re after. Sadly, in all the newsrooms I’ve worked in, it’s never going to happen. The first time someone asked me this, I was actually dumbfounded and more than a bit jealous. A 24-hour newsroom is a hectic, stressful environment where every second is a step closer to a deadline. Maybe it’s different in less fast-paced newsrooms but in my experience, the idea of taking 20 minutes out of the day to meet a PR who may or may not be helpful is unimaginable.

Enjoying this? Read the article in full at Response Source here – there’s still three more annoying tactics (and number four is a shocker)